About your South Dakota Fishing Trip

About your South Dakota Hunting Trip

Fishing & Hunting with Professional South Dakota Guides with Over 30 Years of Friendly Service!

If you are looking for a top-notch fishing and sporting guiding service, look no further than Dave Spaid. Dave preserves wildlife by creating new habitats. He is professional, courteous and helps city dwellers (like me) commune with nature in a relaxing environment filled with beauty and his fur baby dogs. Dave and his sweet spouse, Joann Van Zee Spaid love their dogs and their customers. My friends and I have been utilizing Dave’s service for fifteen plus years and it is a trip we look forward to every year. If you want to see a beautiful area, meet some cool people, watch awesome dogs work as a team and have a stress free getaway, call Dave. You will be glad you did! Seeing Mt. Rushmore a couple of hours away isn’t bad either.

More than 1,100 square miles of water and a fishing season that is open all year awaits you in South Dakota. Today’s Missouri River system and Lake Oahe is far from the muddy, winding waterway Lewis and Clark traveled some 200 years ago. Four massive dams, completed in the early 1960s, mitigated the river and created more than 900 square miles of open water and 3,000 miles of shoreline.

Dave Spaid is one of the best and most experienced fishing and hunting guides in this area of South Dakota. He is the originator and inventor of the “Slow Death” fishing technique.  A bait rigging method for catching walleye and other species commonly used by nearly all of the walleye pro’s across the nation.  His knowledge of Lake Oahe and the Missouri River system near Pierre, South Dakota has paid off for his clients over and over again.

If you are looking for a fishing guide trip for South Dakota walleye, smallmouth bass, northern pike, catfish and salmon, feel free to contact us at Dave Spaid fishing and hunting guide service to help plan your next great outdoor adventure. 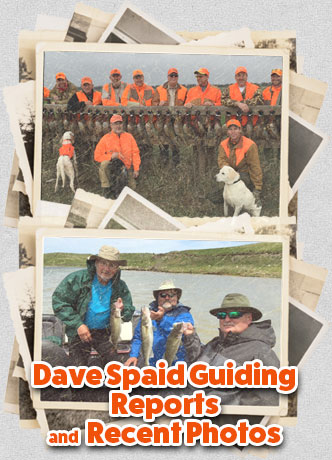 Check back often for our Latest SD Fishing and Hunting Reports!

We farm for Wild Pheasants. We are not a preserve.

How and when were pheasants introduced into South Dakota? It was in 1908, when a group of farmers purchased a pair of birds from an Oregon farm and released them into a field near Redfield, SD. The hearty pheasant not only survived, but thrived on the prairie, prompting the state to purchase and release 48 additional pairs of birds.  In 1919, the pheasant population was high enough for the state to hold a pheasant hunting season.

A century later, the combination of good habitat cover, wildlife management and undisturbed nesting ground have made our farm in South Dakota a pheasant hunting haven and a world-class pheasant hunting destination.

If you are looking to book a South Dakota Pheasant hunting trip please contact us at Dave Spaid Guiding to help plan your next great outdoor adventure at Spaid Farms pheasant hunting.